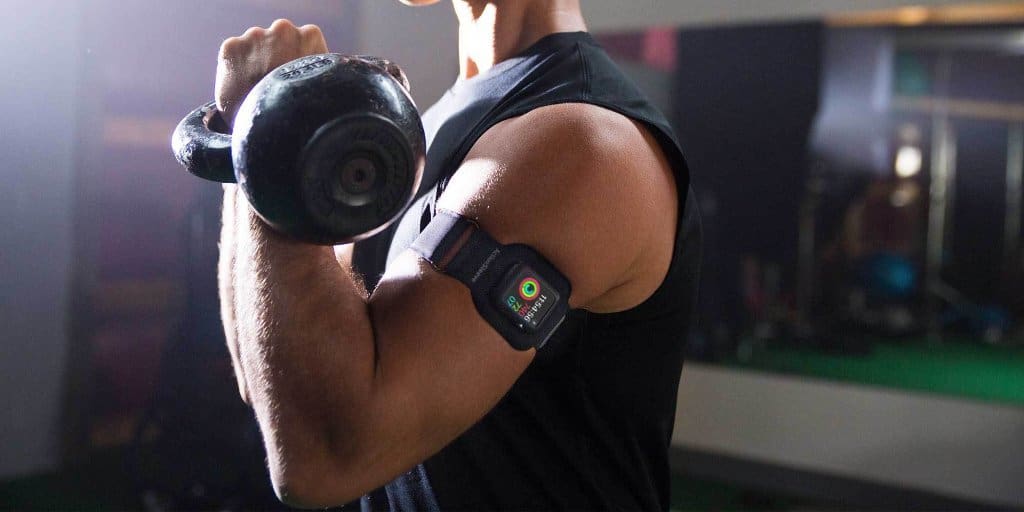 The Apple Watch is an ideal workout partner, but it’s not a good idea to have things around your wrist during certain activities. An Apple Watch armband would be perfect.

Now you can wear your Apple Watch on your arm with ActionSleeve from Twelve South. It’s the world’s first armband for Apple Watch, and it is now available in our Watch Store.

An armband for Apple Watch might sound like a silly idea, but for some people, it’s incredibly useful. If you regularly play sports that require large gloves, use straps while weightlifting, or just don’t like wearing something around your wrist while working out, it’s perfect.

ActionSleeve straps your Apple Watch to your upper arm or bicep, and surrounds the device in rubber to protect it. The display and Digital Crown remain exposed so you can still see and use your Apple Watch while working out, and the heart-rate monitor works just as you would expect it to.

In fact, Twelve South says your heart rate readings might become even more accurate than if you wore your Apple Watch in the “normal” location.

“When you flex your wrist or your watch band isn’t tight enough, it can cause inconsistent readings or dropouts,” the company said. “ActionSleeve holds Apple Watch tightly and securely to your upper arm — delivering more consistent skin contact and more accurate heart-rate tracking.”

Setup is as simple as removing the straps from your Apple Watch and placing the device inside ActionSleeve’s rubber frame.

ActionSleeve is available for both the 38 mm and 42 mm Apple Watch, and it comes in black or red.

An additional slim size is available in black for 42 mm. Made of neoprene and silicone for comfort and durability.

It is what it is. Clear, doesn't fog after a lot of use, fits well to my wrist and looks clear enough that you hardly notice the band. I like it.

This is almost as good as Apple’s band but at 1/3 the price! Have had it a month and love it!

My iPhone protector was easy to install and works without any problems. I recommend it

I was having a problem dropping my tablet. Various cases were tried, but added too much weight or were themselves hard to hold. This case is very easy to grasp and securely holds my tablet and pen. It is without frills. Learning to reach the desired volume change button and the screen power button is my challenge. Old, fat fingers are not a good match with the case’s protective design features. Overall, a very good value.

I pictured more of a plug-in for iPhone. Works ok. Not thrilled.