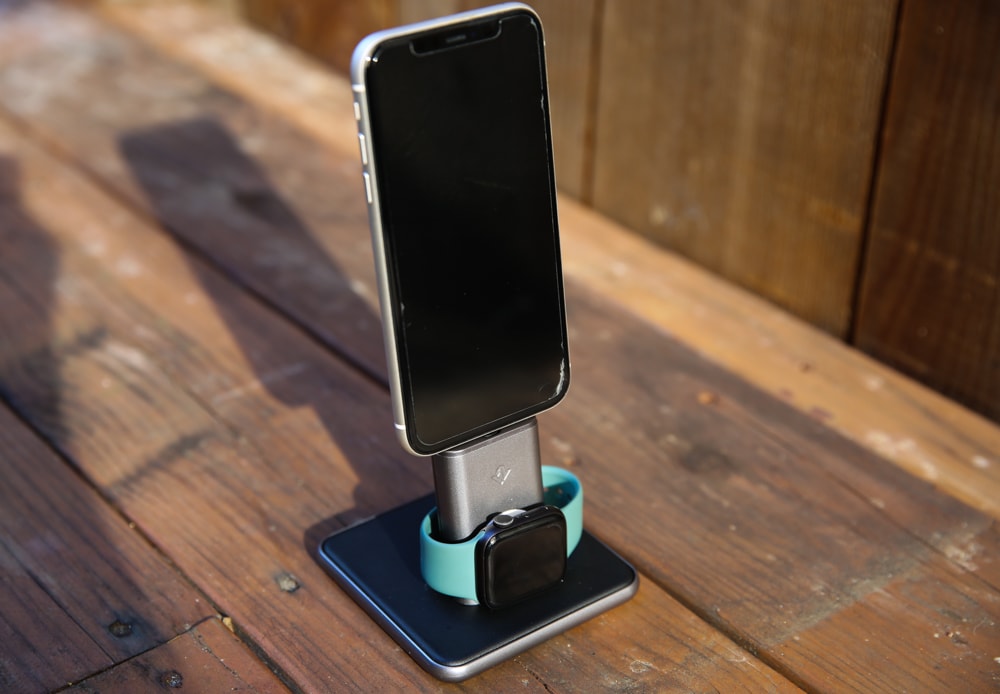 Twelve South’s HiRise Duet iPhone and Apple Watch Stand is one of the best high-end charging stands on the market.

It charges fast, keeps my Apple Watch in nightstand mode, and takes up minimal room on my bedside table. Constructed from premium materials, The HiRise Duet makes decluttering sleek and stylish.

The $99.99 HiRise Duet features a built-in Lightning connector and a charging disk for Apple Watch.

It’s one of the few charging docks designed for the Apple Watch’s Nightstand mode. The charger holds your Apple Watch sideways while charging, turning it into a bedside alarm clock, with the Digital Crown serving as a snooze button. It works great: I have no problem fumbling for it first thing, even in the foggiest of early-morning fogs.

Twelve South is well-known for its high-quality products. The HiRise Duet is no exception. The sleek, vertical stand is like a monument to good design.

It saves a lot of space on my nightstand and it’s minimalist style looks nice in any room and with any watch band. I already plug in both my Apple Watch and iPhone at the same time anyways — before I go to sleep — so the dual charging is very convenient.

The stand is made from anodized aluminum with a weighted base, giving it a nice heft. A rubber pad on bottom ensures it won’t slide around on your nightstand. The base also has a leather top to stop it scratching your Apple Watch. It’s a nice, thoughtful touch.

You can tell that Twelve South designed the stand to last; it works with all Lightning devices (including AirPod charging cases, the Apple TV remote, even an iPad in a pinch), and it’ll more than likely fit whatever new iPhones are released in the future.

The HiRise is highly adjustable. It features an adjustable back support plate that slides back and forth to accommodate different iPhones or iPhones in cases. The back plate holds your iPhone tightly in place so it is easy to use while charging. Even the height of the Lightning connector can be adjusted.

The HiRise Duet dock boasts 15-watts of charging power, which means it charges almost twice as fast as standard USB chargers. The charging speed is pretty impressive. In tests, it brought my iPhone to 50% charge in about 30 minutes, which is roughly equivalent to the 18-watt fast charger Apple includes with the iPhone. Fast charging is supported by the iPhone 8 and later.

My only qualm with the HiRise stand is the power brick. It’s a big one. While I like that there’s only one power brick to charge both my iPhone and watch, it’s pretty bulky and takes up a lot of room on my power strip. It is hard believe that the big bulky brick and the sleek stand both came from the same box. But one brick charges both devices and it’s usually hidden from sight.

Everything about the HiRise Dock is classy. It’s made from high quality materials that are designed to work for a long time and work well. The styling is timeless and it takes up a minimal amount of space. Even the packaging made me smile. Twelve South took a page out of Apple’s book by having slide-out packages that make unboxing the HiRise very satisfying.

But what I like best is the unique style and the fast charging. The HiRise is a high-end stand, and if you don’t mind shelling out some bucks for it, it’s a great charging stand.

The suggested retail price for the Twelve South HiRise Duet Charging Stand for Apple Watch and iPhone is $99.99.

Buy from: Cult of Mac Store.

Twelve South provided Cult of Mac with a review unit for this article. See our reviews policy, and check out more in-depth reviews of Apple-related items.