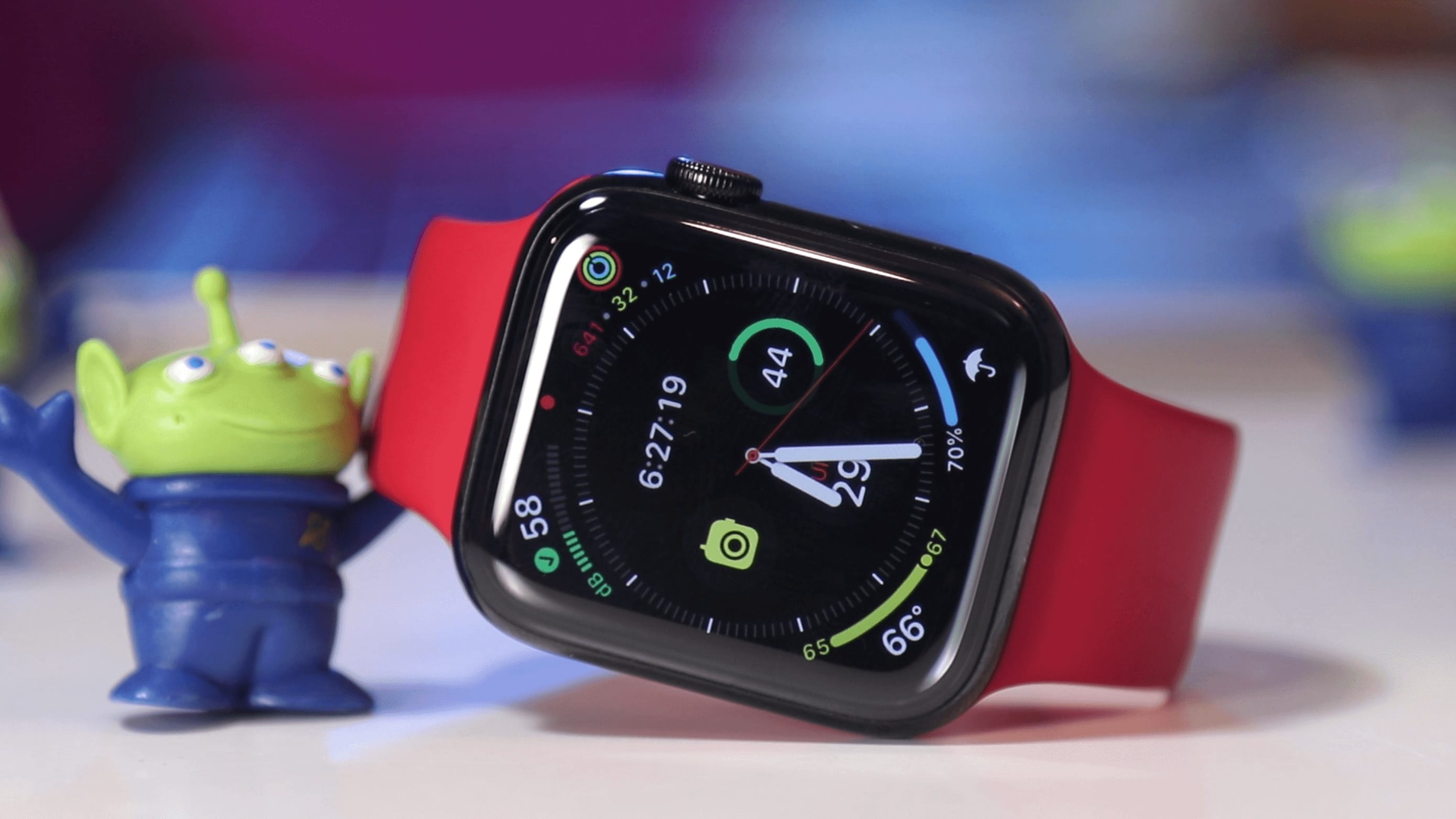 During the past week with Apple Watch Series 5, I’ve been testing the device. Once again, I took a new watch on my family vacation to Disney World, using it whenever possible to make my life easier.

So does the Series 5, with its always-on display, live up to the hype? And is it worth the upgrade if you’re on an older version? Watch our video review, or read our full Apple Watch Series 5 review, to find out if the new watch is right for you.

From a hardware perspective, the Series 5 looks identical to the Series 4. Some new titanium finishes look ever so slightly different than aluminum, and Apple brought back the ceramic Edition at the high end of the price scale, but for any other case option, you’d never know the different from the outside. That is, except for the watch face.

With the Series 5, you get a new always-on display. This makes passively checking the time easier. There’s no need for a super-obvious arm raise to see the clock or peek at the current temperature.

With that always-on display, some complications — things that update constantly, like the second hand or the current noise level — don’t show when the watch doesn’t detect a wrist raise. Other things — including the current time, date or temperature — are there, just a glance away.

In practice, I’ve gotten so used to raising my wrist that it’s just second nature at this point. Now, with the always-on screen, even if the turn of my wrist doesn’t trigger the watch to wake, I can still get the time. No more awkward wrist-wiggle thing to wake the watch.

The Series 5 also comes with a built-in compass. It seems accurate, and could theoretically be useful for orienting yourself if you end up in an unfamiliar theme park, for example. I used it a few times to get my bearings instead of pulling up the Disney World map, but I’m not sure that was actually helpful. It seemed more like a novelty than a necessity.

watchOS is really the star of the show

As it pertains to using Apple Watch on vacation, the big things that were most useful aren’t specific to the Series 5. In fact, almost every feature that makes the Apple Watch useful comes down to the latest watchOS software.

Going around the parks, I mainly used my watch for calling or messaging my family. It works just as it always has, whether you use dictation, Scribble or Siri. It’s one of the more reliable things the watch does, and that’s super-important to how I use the device.

Much like last year, when I reviewed the Series 4 at Disney World, I tried to use Walkie-Talkie on the Apple Watch again. I found that the initial connection was typically slow, assuming it was successful at all. I’m not sure whether that’s due to the way Walkie-Talkie works or to network congestion at the parks. But if quick communication is your goal, this ain’t it, chief.

Ultimately, almost all communication took place via a quick phone call or iMessage — both of which work great on Apple Watch. Having quick communication just a Siri request away also allowed me to keep both hands — and my iPhone — free for pushing a stroller, carrying souvenirs, or looking at a map in the Disney Parks app.

Again, this isn’t something special with the Series 5. Most of these capabilities have been there since the original. But the Series 5 is fast and responsive, and that leads to a better experience.

Improvements in health and wellness

Outside of vacation mode, one of the biggest reasons I wear my Apple Watch every day is to remember to stay active. The Series 5 continues to flex Apple’s strengths in health and activity, offering just the right motivation to keep you moving. Even on our trip to Florida, it reminded me take breaks from driving and stop to move around for a few minutes. Plus, it proved helpful in giving me an idea of how many calories I burned walking the parks. This helped me justify many extra calories I consumed bouncing from food stand to snack cart.

While the fitness and activity stuff isn’t new this year, Apple did add a useful health-related feature.

New in watchOS 6 is the Noise app. Of all the things I was surprised to find myself looking at on the new watch, it was the noise levels in different parts of the parks. Theme parks can get unexpectedly loud at the turn of a corner. And, as someone who has done enough damage to their hearing already, I’ve started to care more about loud noises and loud environments.

Even more importantly to me is knowing when it’s getting too loud for my family, and especially my daughter. I don’t want to subject her to excessive loud sounds or cause her some sort of hearing damage before she starts kindergarten. With the Noise app and its alerts, I can be more aware of just how loud things are. And knowing is half the battle.

Aside from knowing the current ambient noise levels, I liked watching the noise meters bounce around as we ventured from ride to ride, sat in on different shows, and stumbled upon various street performers. To nobody’s surprise, most of it is right on the edge of being too loud.

A reason to upgrade

It is worth noting that, much like the ECG feature that Apple released last year, the Noise app is only available on Series 4 and above. That, in my opinion, might actually be a more compelling reason to upgrade from an older Apple Watch than the always-on display.

Personally, I’ve been on a Series 3 for two years. The jump to the Series 5 is a good step up in both functionality and screen size. Seeing the 44mm display, compared to the older 42mm size, is actually impressive. While 2mm doesn’t sound like a lot, it’s almost 5% larger. I think the space black stainless steel case adds to the effect, creating a less obvious transition between the glass and the metal case.

Not everything is 5-star for the Series 5, though. Over the course of the last week, there was one thing about the new watch that I kept noticing. Something almost troublesome, in fact — battery life. With the Series 5, battery life seems to have taken a big step back.

With my Series 3, battery life was rock-solid. I could easily wear the watch for 24 hours and still have more than 30% left in the tank. This enabled me to use sleep tracking, or wear my Apple Watch as a morning alarm clock. In these first few days of testing the Series 5, battery dipped about 5% each hour — meaning 20 hours of battery life, assuming ideal usage.

I’m not entirely sure this is actually a hardware problem, since my Series 3 is also showing slightly worse battery after updating to watchOS 6. A number of people on Twitter say they see the same thing — especially with the Series 5. Some people point to the always-on display as the culprit. Others theorize that it’s something about the cellular Apple Watch models. Either way, I’d love to see battery improve over time, not slide backward.

Is the Series 5 worth the upgrade?

If you’re wearing a Series 3 or older and are thinking about upgrading, the Series 5 is a great device. It packs some great features that won’t work on older watches, and a newer UI experience. There are some concerns with battery life, but it’s likely that a software update will resolve that.

If you’re already wearing a Series 4, I wouldn’t necessarily rush to upgrade just for the always-on display. The convenience of the display is nice. And the new materials look great, if you’re in the market for a high-end wearable. However, the rest of the experience is almost identical to a Series 4. Then again, if you’ve got matches and money, feel free to make a fire, I guess.

If you’re looking to get an Apple Watch for the first time I recommend visiting an Apple Store if possible. Take a look at both the Series 3 and the Series 5. The nerd in me says get the Series 5.  More practically, you can get 90% of the same features for half the price with the Series 3.

Ultimately, I’m really enjoying the Series 5. As someone that’s worn an Apple Watch every day since the launch in 2015, it’s amazing how much has changed. Apple Watch has added tons of convenience and impacted me and my health over the last 4-plus years.

I know the Apple Watch may not be for everyone. I also know there are literally thousands of configurations of case, band and watch face. That means if you’re even moderately interested, there’s likely something in the Apple Watch you can enjoy.

Lengthy product title....Yes, I ordered this screen protector based on Cult of Mac's product description that it's like writing on paper. Bottom line...it's a far better screen protector that aids "writing" with an Apple Pencil (I have the 1st gen version), greatly reduces finger prints (always good) when using the Apple Pencil, input is immediate and precise. I'm a lefty and this screen protector allows minimal effort when writing electronically. I'm not an artist so I cannot rate how this screen protector handles an artist's desires. I will say my primitive artwork (cups, objects, etc.) drawn with my iPencil are spot on and represent my vision for my coffee cups, primitive as they may be,.

Overall, I have no buyer's regrets for this purchase. However, some caveats...the application instructions are verrry sparse (A and B on two tabs, that's it). Once on, the tactile sensation is different...it has a "pebbly" like feel when you run your finger over the screen protectors surface. It's a strange sensation that always surprises me, yet, its this "pebbly" surface that allows the user to work their magic, whether writing or drawing as well as keeping fingerprints to a minimum. For use on a iPad, it works wonderfully and will capture your vision. However, this screen protector will never feel the same as writing with a fountain pen on quality paper.

Again, no buyer's remorse...just my thoughts on a quality product that works well on an iPad.

This AirPods Pro case fits pretty snugly, and seems to protect my AirPods pretty well. Wireless charging through the case works great -- and it is also easy to access the Lightning charging port on the bottom. The ring for attaching to a backpack or belt loop is fairly solid. And it looks like a tiny suitcase :) Overall, it works great for me!

Unfortunately, the leather is beginning crack and the color is coming off with the cracking.
I have only had this watch band a short time, so I feel this should not be happening.

Good morning, Thank you for your feedback, and I apologize that you are not satisfied with your item, but it sounds like the item you received, maybe defective. If you are able to send me an image of the item we can get this issue resolved for you. My email is adel@cultofmac.com
Many thanks, Adel.

First time I’ve used a 3M stick mount and it’s holding really well on the stick side, no sign it’s weakening. On the magnet side the phone never falls out, but it will slide off if you try to put a lightning cable in or pull one out from the phone while it’s mounted. That’s a real nitpick because otherwise it’s an awesome mount.